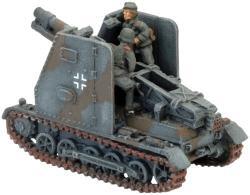 The 15cm sIG33 auf Panzer I was an attempt to make the 15cm infantry gun more mobile for attacks on bunkers and fortified buildings - a need highlighted in the Polish Campaign. The result was a devastating weapon for the short-range destruction of guns and fortifications.

The gun, complete with carriage and wheel was mounted on a Panzer I Ausf. B chassis and protected by armored shields 10mm thick. This provided the four man crew with a basic level of protection while in action but left the crew exposed from above and to the rear of the vehicle.

Standing nearly ten feet in height, the 15cm sIG33 auf Panzer I stood out on the battlefield making it a difficult vehicle to conceal. This was not its only handicap, weighing 8.5 tons the chassis was severely overloaded and mobility suffered accordingly.

Allocated to the Panzer Divisions before the campaigns that climaxed in the German victory in France in the summer of 1940, a handful were still in action on the Eastern Front until the middle of 1943.

* = Unarmoured targets automatically fail their saves when hit by the main gun of the 15cm sIG33 auf Panzer I infantry gun.