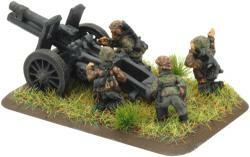 
The 15cm schweres InfanterieGeschutz 33 (sIG33) was designed and built to fulfil the requirement for a powerful, close support gun for the infantry. The German Army preferred infantry support guns rather than the mortar that most other countries tended to favor for this kind of role.

The design was conventional but rather heavy for its intended purpose. Originally intended to be horse drawn, later versions had rubber-tyred wheels and air brakes to allow them to be towed by vehicles. Attempts were made to lighten the gun but not many of this version were made, as the alloys needed for the job were more essential to aircraft production.

The sIG33 Gun in Flames Of War