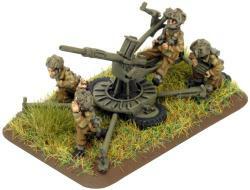 While the Polsten saw extensive use in the British army during the latter years of the Second World War, its design was of Polish origin. Before the Germans invaded in September 1939, the Poles were working on a simplified version of the highly effective Oerlikon anti-aircraft gun that would be cheaper to manufacture. Work on the design was virtually complete when the Germans invasions forced the design team to flee to England.

With the design team reformed, the Polish engineers collaborated with their Czech and British counterparts to produce the weapon which became known as the Polsten (Pol for Poland and Sten are the British Sten Company).  A completed Polsten consisted of less than half the number of components of the Oerlikon (119 parts versus 250 parts) and far cheaper to manufacture (£60-70 for the Polsten compared to the £320 for the Oerlikon) but was every bit as effective as the more expensive and complicated Oerlikon.

The Polsten also featured a vertical box magazine that held 30 rounds in a double stack arrangement. This magazine was a vast improvement over the Oerlikon’s drum magazine which was awkward to load and time consuming to manufacture.

The Polsten could fit any mounted designed to take the Oerlikon and while it never fully replaced the Oerlikon due to extremely robust design despite the manufacturing expense. Both guns served the British Army into the 1950s.