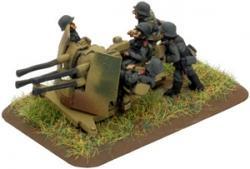 Target tracking was accomplished by the means of traversing and elevating the guns via two hand wheels. The guns themselves were fired by two foot pedals, each firing the pair of gun diagonally opposite and could be fired in pairs or simultaneously in either semi-automatic or fully automatic modes. The gun proved versatile and was effective against both ground targets and low-flying aircraft.

Place these guns near your most valuable platoons to keep the enemy planes away or deploy them at critical junctions and tear up the enemy infantry when they are forced to come out into the open.