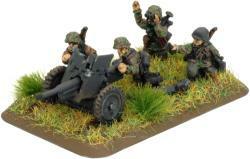 
The 3.7cm PaK36 was Germany standard anti-tank weapon at the outbreak of war in 1939; over 15,000 PaK36s had been manufactured by 1941. It proved to be an excellent weapon during the early years of the war until the introduction of well-armoured tanks such as the T-34 rendered it obsolete. This didn’t halt its career; it remained an important secondary weapon.

The 3.7cm PaK36 had the advantage of being highly portable and reasonably effective against all but the heaviest Allied tanks. In 1942, the introduction of the Stielgranate round extended its service life a little longer. This specialised round could penetrate 180mm of armour at a range of 100m. But required nerves of steel from the crew, "shooting with the Stielgranate required more nerves than tank close combat" (official report from the 1st Infantry division).