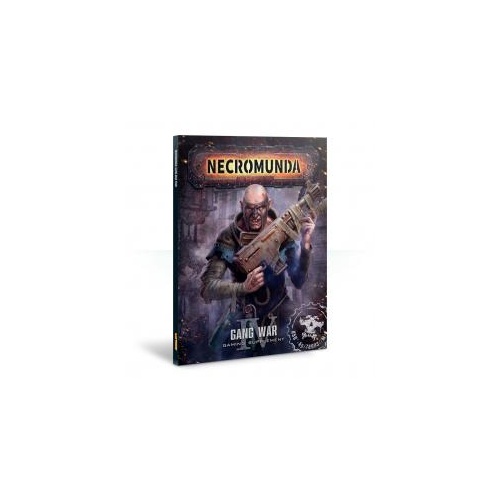 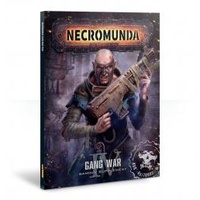 Note: a copy of the Necromunda: Underhive boxed game is required to use this supplement. The rules included with the Necromunda: Underhive boxed game cover battles between Houses Escher and Goliath – these are not the only Houses vying for supremacy of the underhives. Necromunda: Gang War 4 introduces House Cawdor; a vast empire built on unshakeable faith in the Cult of Redemption (and the discarded scraps from other clans). Along with this, the book expands upon the rules for Brutes found in Gang War 3, and introduces The Dominion Campaign – an entirely new territory-based campaign system. Contained in the 96-page softback: - Gangs of House Cawdor: This section contains the story of House Cawdor, who have taken the message of the Cult of Redemption to heart more fervently than any other clan – unearthing ‘blessed’ relics from the garbage, bodging together tools and building weapons with which to give themselves utterly to the Emperor. This includes a detailed breakdown of their place in the hierarchy of Necromunda, and the methods by which they exact violence upon their rivals. It also contains full rules for founding a House Cawdor gang, with gang composition and an exhaustive equipment list; - Bionics: a selection of 7 bionic upgrades for fighters of every gang, used to repair damage sustained as a result of violence and hardship – if you have the funds, injuries can be fixed or even avoided altogether with a brief visit to a techno-chirurgeon; - Skirmish Games: not everyone has the time to commit to a full campaign – to that end, Gang War 4 includes rules for creating gangs to use in standalone skirmishes, complete with extra skills, characteristic increases, access to weird and wonderful Rare Trade equipment and even Hangers-on and Hired Guns. There’s also guidance on using these rules in a tournament setting; - Exotic Beasts: add Sheen birds to your House Cawdor gang with this section, expanding upon the Exotic Beasts rules found in Gang War 3; - House Brutes: this adds new Brutes unique to each of the Great Houses of Necromunda. Includes: Escher Khimerix, Goliath ‘Zerker, Orlock Lugger Cargo Servitor, Van Saar Arachni-rig Servo Suit, and Cawdor Stig-Shambler; - The Dominion Campaign: a brand new territory-based campaign system, Dominion Campaigns are an exhaustive campaign format which can be used instead of Turf War. Gang War 4 includes everything you need to set up and run a Dominion Campaign, including advice on campaign length, generating territories, founding gangs (with a blank roster for your own use), recruiting new fighters, gaining experience, the role of an arbitrator, advancements, gaining skills, lasting injuries, captured fighters. It also includes detailed pre-and-post-battle sequences determining how to set up your games, visiting the Trading Post, gain and control territories, and determine the criteria for your overall victor; - New Scenarios: 6 scenarios that can be used in a Skirmish game, Campaign game or Arbitrated game: The Hit, Settlement Attack, Escape!, Murder Cyborg, Escort Mission, and Fighter Down; - Psychic Powers: rules for using Psykers and their Wyrd Powers in games of Necromunda, with rules for Sanctioned and Non-sanctioned Psykers along with Perils of the Warp; - Skills: a fully up to date list of all the skills available to fighters; - Rules and background for the following Hired Guns: Slate Merdana, Orlock Road Boss and Macula his Cyber-mastiff; Baetrum Arturos III, Guilder Bounty Hunter; and Ortruum 8-8, Psykanarium Bounty Hunter.