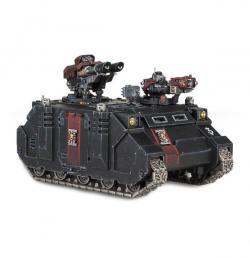 The Deathwatch rely on shock tactics and sudden assaults in order to penetrate the lairs of the xenos. Certain vehicles lend themselves better to this style than others, and while the entire range of the Imperium’s vehicles are available to the Deathwatch, the Razorback and Rhino are their choices when pushing deep into the most hostile territory. The Rhino armoured personnel carrier has been a mainstay of Imperial forces for millennia; robust and dauntless, part of its enduring legacy is the ease of field repair as well as its ability to crush all before it. The Razorback is a variant that sacrifices berths in the hold for a merciless heavy weapons turret – both of these are indispensable tools to the Deathwatch and their brutal struggle against the darkness.

This multi-part plastic kit contains all the components necessary to assemble one Deathwatch Transport, in either Rhino or Razorback configuration. You’ll receive a Razorback, assemblable optionally as a Rhino, plus a Deathwatch Upgrade Frame – this contains 10 Space Marine shoulder pads and 2 Terminator Armour shoulder pads with Deathwatch insignia, a Sergeant chest plate, 2 variant helmets, a power sword, a small backpack icon and 2 large vehicle icons, meaning you’ll have plenty of spare bits with which to assemble your perfect Kill Team!