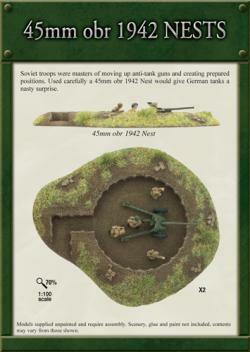 An unusual type of Soviet infantry formation was the Fortified Region (Ukreplennye Raiony). These infantry units were designed to man fortified lines such as the Stalin Line. Each Fortified Region was essentially a regiment or brigade strength unit made up of a number of Machine-gun Artillery Battalions (Pulyemyetno-Artillyeriyskiy Batalon). An important part of these positions were the anti-tank guns used to back up the machine gunners.

By 1943 most of these were manning field fortifications rather than purpose build concrete and steel fortifications. In addition to the Machine-gun Artillery Battalions each fortified region was also supported by infantry battalions, sappers and artillery. A Fortified Region held parts of the line where mobility wasn’t required and where their economy of men to weapons was ideal for holding the front against attacks.

They are masters of concealment and disguise their positions well, hiding from the enemy until they choose the moment to open fire and lay waste to the fascists. The company has little in the way of transport and once dug-in into new positions they will defend with hardened determination against anything the enemy can throw at them.