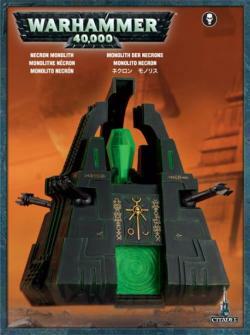 Nothing is so emblematic of Necron implacability than the Monolith. Like all Necron constructs, it is composed of living metal: a complex semi-sentient alloy that ripples and flows to repair damage in the blink of an eye. Energy beams are absorbed and dispersed, whilst tank-busting missiles simply ricochet of the Monolith's armoured hide. Indeed, the only way to truly halt the advance of a Monolith is to target it with a sustained period of focussed fire, though few enemies have the discipline to bring it down, especially when the Monolith brings its own firepower to bear in return. Armed with the tank-shattering particle whip, the Monolith can turn enemy tanks into smouldering wrecks in a split second, or reduce infantrymen into molecular vapour. Those lucky enough to survive this ferocious attack will find themselves caught within the Monolith's gauss flux arcs - a pre-programmed defence system that can pre-empt even the random movements of panicked foes. Yet these weapons are nothing compared to the eternity gate - the most terrifying of all the Monolith's weapon systems. This shimmering energy field is nothing less than a captive wormhole, bound into the very heart of the Monolith, and those who stray to close could well disappear forever.

This multi-part plastic boxed set contains 60 components with which to build one Necron Monolith (including 30 translucent green components for the gauss flux arcs and the particle whip). This kit comes with one Necron transfer sheet. It is supplied unpainted and requires assembly - we recommend using Citadel Plastic Glue and Citadel Paints.