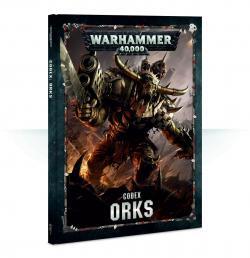 A new addition to the Speed Freeks series: the gloriously monikered Boomdakka Snazzwagon! If you like going (very) fast and shooting things at the same time, look no further.

The roar of overcharged engines and the crackle of flames herald the arrival of the Boomdakka Snazzwagons. Lightly built speedsters based around looted vehicle frames, Snazzwagons are clad in hastily welded scrap armour. Their drivers go hell for leather, as they know that a single artillery shell is likely to blow their ride to smithereens. Of course, the enemy has to hit them first, and as the Snazzwagons fishtail and skid madly through hails of incoming fire, it quickly becomes apparent that this is no mean feat! Gangs of howling Burna Boyz cling on, flinging burna bottles – the resulting inferno is as dangerous to the Orks as it is their foes, but the crew is too busy having fun to worry about paltry concerns like getting cremated in a firestorm… This multipart plastic kit contains the components necessary to assemble a Boomdakka Snazzwagon. Designed for pure speed, it eschews the usual Orky technique of nailing every single bit of metal in the area to a vehicle – you have the option of assembling it without even the roof, exposing the roll cage. Attached to the frame is a network of exhausts and intakes that feed the enormous, powerful engine mounted in the front. As well as this engine, the front of the Snazzwagon features a massive dozer blade, with a masked Grot tightly strapped on – as if that weren’t enough manic detail, there’s a mek speshul mounted to the left side of the main air intake. The driver is leaning out of the right-hand side, leering ahead with a burna bottle ready to go, while riding shotgun is another Grot, this one waving a blasta. A bellowing Burna Boy balances on the back, burna bottle in one hand and the trigger of a big shoota in the other. This kit comes as 65 components and is supplied with a Citadel 170mm Oval base.