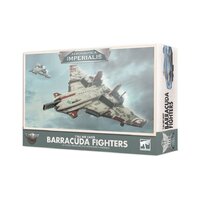 Build six Barracudas with this box, armed with Swiftstrike railguns, burst cannons, ion cannons and missile pods. Add drones for all-around protection and extra firepower, plus Seeker missiles to pack an even harder punch. The set includes: - 6 plastic T’au Air Caste Barracuda AX-5-2 miniatures (can also be built as AX-5-3 and AX-5-4 variants) - 6 Aeronautica Imperialis bases (each base designates the model’s front, rear and side arcs, has speed and altitude dials, as well as a clear stand to connect the aircraft to the base) - 1 T’au Aircraft transfer sheet The rules for using these miniatures in games of Aeronautica Imperialis can be found in both Aeronautica Imperialis: Skies of Fire and the Taros Air War Campaign Book.