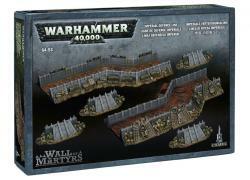 Across the Imperium, mankind defends itself from the predations of aliens and heretics, and the Imperial Bunker is a robust fortification that can be used to resist the attacks of such foes.

The Imperial Bunker is a large fortification, which is bedecked with a huge array of details including: metal-look platforms, stone walls, the decaying skulls and bones of dead Cadians, ramparts, abandoned weaponry and the iconography of the Imperium of Man such as a large metal-look wreathed skull. This would make a splendid centrepiece to your collection of Citadel Miniatures.