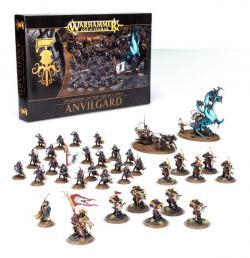 Anvilgard is a heavily fortified port city that borders the sweltering jungle of the Charrwind Coast, first founded under the direction of the Anvils of the Heldenhammer. Surrounding Anvilgard on all sides is a dense, sprawling jungle encircled by a series of active volcanoes – the Order Draconis ride out into this wilderness every day, testing themselves against the ferocious monsters that populate the area.

Represent the city of Anvilgard in a Warhammer Age of Sigmar: Firestorm campaign quickly and easily with this set of 34 plastic miniatures, designed to represent the forces of Order that live there. Included:

- A Knight-Vexillor: carrying a warhammer and meteoric standard, he features incredibly intricate armour;
- 2 sets of Judicators: 10 models in total, with skybolt bows, boltstorm crossbows, shockbolt and thunderbolt bows included, as well as 24 variant heads;
- A Scourgerunner Chariot, drawn by 2 dark steeds and holding 7 harpoons – their Beastmaster crew can carry a spear or ravager harpoon;
- A Black Ark Fleetmaster, who comes armed with a black ark cutlass and murder hook;
- A War Hydra, 6 headed monster (each head unique) with 2 Beastmaster Handlers, who carry cruel goads and whips – this kit can optionally be assembled as a Kharibdyss;
- 2 sets of Black Ark Corsairs – 20 models in total, armed with vicious blades, wicked cutlasses and repeater handblows.

Also included is an Allegiance Ability rulesheet for armies from Anvilgard, as found in the Firestorm book, and 2 Stormcast Eternals transfer sheets.