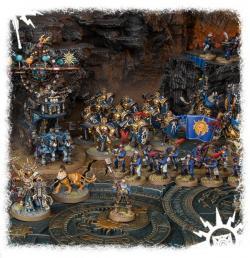 The Twin-tailed City – a sprawling metropolis that stretches from the ashen plain of Aqshy to the fecund jungles of Ghyran, Hammerhal was founded upon the victories achieved in the Realmgate Wars. Though the forces of ruin and disorder have long sought to despoil this wondrous testament to the will of the God-King, the Twin-tailed City has endured, and only grows in might with every passing season.

Represent the city of Hammerhal in a Warhammer Age of Sigmar: Firestorm campaign quickly and easily with this set of 38 plastic miniatures, designed to represent the forces of Order that live there. Included:

- 1 Lord-Castellant: armed with a Castellant’s halberd and clutching a warding lantern, he comes with a loyal Gryph-hound;
- 1 set of Liberators: 10 models, each with the option of 4 different weapon configurations – warhammer and sigmarite shield, two warhammers, warblade and sigmarite shield or two warblades – and two each of these heavy weapon options – grandhammer and grandblade;
- 1 set of Freeguild Guard: 10 models which can be armed with spears, halberds or swords;
- 1 set of Freeguild Handgunners: 10 models which can alternately be assembled as Crossbowmen;
- 1 set of Demigryph Knights: 3 models, armed with lances and swords or cavalry halberds;
- 1 Celestial Hurricanum: an elaborate horse-drawn carriage, covered in arcane symbolism, which includes a Celestial Battlemage on foot and can optionally be built as a Luminark of Hysh.

Also included is an Allegiance Ability rulesheet for armies from Hammerhal, as found in the Firestorm book, and 2 Stormcast Eternals transfer sheets.