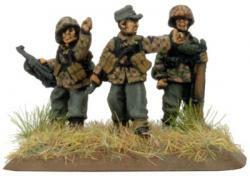 The development of the 7.5cm PaK40 came about as a direct result of the experiences had by the Wehrmacht during Operation Barbarossa when they encountered the heavy Soviet KV-1 series of tanks.

Able to penetrate up to 132mm of armour at a range of 500 metres, the PaK40 remained the standard German heavy anti-tank gun until the end of the war. It was also supplied to Germany’s allies such as Finland and Hungary.