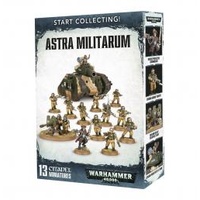 Made up of innumerable billions of soldiers from a million different worlds, the Astra Militarum is, by sheer weight of numbers, the greatest army the galaxy has ever known. For ten thousand years they have used their overwhelming numbers to crush the enemies of the Imperium and defend against the encroaching horrors of a cold universe that knows only war. They hold nothing less than the survival of humanity in their hands.

This is a great-value box set that gives you an immediate collection of fantastic Astra Militarum miniatures, which you can assemble and use right away in games of Warhammer 40,000! You’ll receive a Leman Russ Battle Tank, a Cadian Heavy Weapon Team, an Officio Prefectus Commissar, a set of ten Cadian Shock Troops and an exclusive Astra Militarum Formation rules sheet - the Armoured Shield - allowing you to collect, assemble and play with your new miniatures right away!