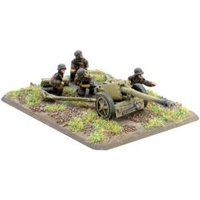 Development of the 7.5cm PaK40 began in 1939, with both Krupp and Rheinmetall developing designs for testing. Initially the development was slow, but priority was soon given to the project after Operation Barbarossa begun in June 1941 and the appearance of heavy Soviet tanks such as the KV-1.

The gun retained many features of the lighter 5cm PaK38 gun. It had a muzzle brake to reduce recoil, a double skin shield for added protection of the breech, and torsion-bar suspension for motor towing. The trail retained the tubular arms of the 5cm PaK38 design, but was made of steel for added strength rather than the aluminium.

The 7.5cm PaK40 remained the standard German heavy anti-tank gun until the end of the war, and was also supplied to Germany’s allies such as Finland and Hungary.

For example, the Hungarian 2nd Army on the River Don received a total of six 7.5cm PaK40 in 1942. But by 1944 the Hungarians were receiving the PaK40 in large quanties.