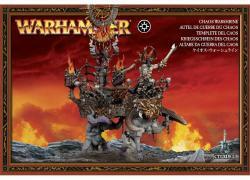 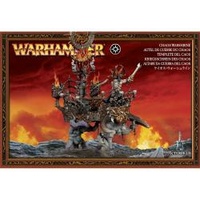 The prayers and sacrifices that are offered up from Warshrines are like sweet nectar to the otherworldly beings of the Realm of Chaos, and the air crackles with power around each shrine with the eye of the gods turns their way. The presence of these mobile altars empowers and emboldens the warriors that fight before them.

The Chaos Warshrine is a towering and baroque model. Two huge, lumbering creatures, one of which possesses two heads, hold the Warshrine above their shoulders. Rings of fat droop over loincloths, broken shackles and loose chains are attached to their wrists, and the Mark of Chaos appears as a scar upon their hide. The gilded carriage of the Warshrine is embellished with features including icons, horns, spikes, rune-etched details, braziers and large flames. The central feature is a massive 8-pointed Chaos Star propped up by a gargoyle; at the centre of it an interchangeable icon can be fixed in place to represent the desired Chaos god. There is also an on-board altar that can be fitted onto the model (into which an axe can be embedded). This decadent model comes with a Chaos Sorcerer that can be assembled with a choice of different heads and hands, allowing even further personalisation.

This multi-part plastic boxed set contains 63 components and a 50 x 100mm monster base, with which to build a Chaos Warshrine.