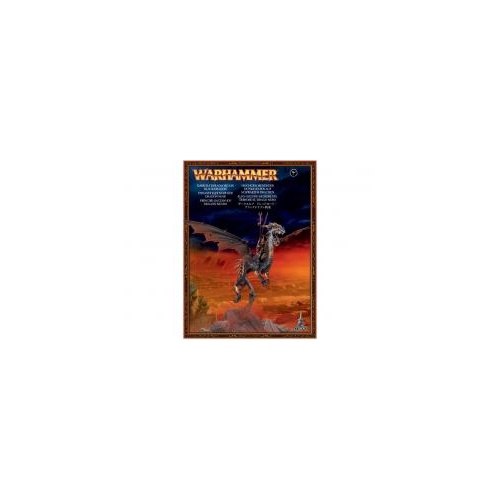 Dragons are an incredibly ancient race whose forefathers lived many thousands of years before even the Elves set foot in the Old World. Although few in number, Dragons are still creatures of vast power and when they are roused from their slumber they are capable of slaughtering entire armies with wickedly sharp claws, horns and fangs. The Black Dragons are, without exception, foul-tempered and aggressive creatures. Flying low over the battlefield, a Black Dragon can launch plumes of noxious gas from its maw, leaving their foes gasping for breath, their lungs ruined and their skin burnt by corrosive acids. The riders of these gigantic beasts, the Dreadlords and Sorceresses of Naggaroth, take great pleasure in the carnage that their mounts cause and will gladly steer them into the most brutal and bloody combats so that they can join in the wholesale slaughter of their enemies.

This multi-part plastic kit contains one Dark Elf Dreadlord on Black Dragon - a finely detailed kit that comes in 82 components, and is supplied with a 50x100mm base. The kit comes with plenty of optional extras, including two different Dragon heads and two different riders - a Dark Elf Sorceress and a Dark Elf Dreadlord, both of which come with a variety of heads and weapons. This miniature is supplied unpainted and requires assembly - we recommend using Citadel Plastic Glue and Citadel Paints.