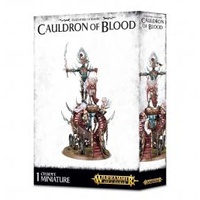 This figurine comes with enough components to assemble either Slaughter Queen OR Hag Queen.

For a battle worthy of their finest offerings, the war covens of the Daughters of Khaine bring forth the greatest of their religion’s icons – the Cauldron of Blood. Mounted on iron-shod wheels, these mobile shrines grind forward propelled solely by the incantations of their riders, as if the machine itself were lured onwards by the promise of carnage. It is said that the Cauldrons of Blood are gifts from Khaine himself, who bestowed them upon his Daughters as a reward for their dedication to his cause.

This multi-part plastic kit contains the components necessary to assemble a Slaughter Queen on Cauldron of Blood. Despite its imposing name and equally terrifying aspect, this is actually a reasonably simple structure – the titular Cauldron is borne aloft on a six-wheeled iron chassis, covered in spikes, chains and blades, with serpentine icons adorning the front. A set of 2 staircases, on which 2 Witch Aelves stand, twist upward toward the cauldron, behind which stands the Slaughter Queen herself. Behind her is an enormous icon of Khaine, standing tall in elaborate armour and wielding a huge sword in his right hand. When this kit is built as a Slaughter Queen on Cauldron of Blood, you can also build an accompanying Hag Queen on foot and Bloodwrack Medusa.