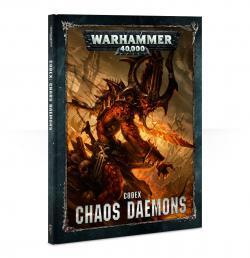 - The Chaos Gods & Their Infernal Legions: descriptions of the warp, the maddening realm that the Chaos Gods call home, and of the major Chaos Gods – Khorne, Slaanesh, Tzeentch and Nurgle – along with their servants, the Chaos Daemons; - Examples of the compositions of daemonic forces for the 4 Chaos Gods – the Scintillating Legions, the Plague Legions, the Blood Legions and the Legions of Excess; - Galactic Corruption: a map showing the impact of the Great Rift, from which the malign energies of the warp pour into realspace, with details of warp storms, Chaos strongholds and daemon worlds; - Chaos Rising: a brief history of major warp-based catastrophes and daemonic incursions – at least, the few that remain on-record… - Background and details on each character and unit available to a Chaos Daemons army; - A showcase of beautifully painted Citadel miniatures, with example armies featuring everything from individual images of models to battle scenes on terrain. Rules Everything you need to get a Chaos Daemons army primed for games of Warhammer 40,000 is in here: - 50 datasheets, providing rules for every Chaos Daemons unit and miniature; - Army abilities reflecting Chaos Daemons’ methods of war on the tabletop; - Daemonic Gifts: wargear both ranged and close-combat for use by Chaos Daemons; - Points values for all miniatures, weapons and wargear for use in Matched Play games; - The Eternal Hordes: rules for Battle-forged armies, including: - 19 unique Stratagems – 7 usable by any Chaos Daemons and 3 each for Khorne, Nurgle, Tzeentch and Slaanesh; - 24 unique Warlord Traits: 6 each for Khorne, Nurgle, Tzeentch and Slaanesh; - Hellforged Artefacts: 15 weapons and artefacts available only to Chaos Daemons; - 21 psychic powers: 6 each for Nurgle, Tzeentch and Slaanesh, along with 3 Dark Hereticus powers for an army fielding Be’lakor; - 6 unique Tactical Objectives.