A Game of Thrones Board Game: A Dance with Dragons Expansion A Game of Thrones Board Game: A Feast for Crows Ex A Game of Thrones: the Board Game (2nd Edition) Mo A Game of Thrones the Board Game 2nd Edition 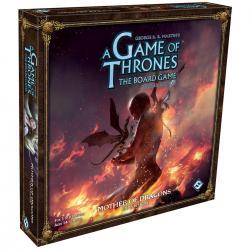 A Game of Thrones: the Board Game (2nd Edition) Mo

“This is another world, thought Tyrion, but not so different from the world I know."
–George R.R. Martin, A Dance with Dragons

The ever-changing political and military landscape of George R.R. Martin’s A Song of Ice and Fire ensures that no Great House can hope to maintain control for long. But although the players may change, the fundamental game will always remain the same.

A Dance with Dragons, an expert-level six-player Print on Demand scenario for A Game of Thrones: The Board Game Second Edition, is now available! With 42 alternate House cards that feature the characters relevant to this period of Westeros’ history, A Dance with Dragons is a special scenario that immediately thrusts players into a grim struggle for survival. After a brief alternate setup to reflect each House’s position in Westeros, you’ll quickly be forced to forge new alliances and discover new strategies.

While A Game of Thrones: The Board Game Second Edition presents events as they occurred in the first two novels of Martin’s series, clever scheming and timely betrayals throughout the subsequent three novels dramatically alter the fortunes of each Great House. The A Dance with Dragons scenario imagines Westeros as it appears in the fifth book of A Song of Ice and Fire.