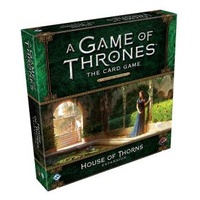 –Olenna Tyrell, A Storm of Swords

Fantasy Flight Games is proud to announce House of Thorns, the fourth deluxe expansion for A Game of Thrones: The Card Game!

At the time of Aegon’s Conquest, the Tyrells were nothing more than stewards to the Gardener Kings. Raised to lordship when the last of the Gardeners were burnt to ash on the Field of Fire, House Tyrell has grown from humble beginnings—and their ambitions stretch far higher. The lands of the Reach are famed for their bounty, the Tyrell knights are paragons of chivalry and virtue, and Highgarden is known as a place of light, beauty, and song. Yet there are hidden thorns beneath the golden rose of House Tyrell, and the intrigues of House Tyrell may be as devious as any Lannister scheme.

House Tyrell surges into the light with their deluxe expansion, House of Thorns! Within this box, you’ll find a wealth of new cards, bringing powerful new options to support and diversify House Tyrell’s most important themes, such as increasing the STR of their characters, removing characters from challenges, and winning challenges with the Knights and Ladies of Westeros. You’ll also find plenty of iconic characters sworn to House Tyrell entering the game, including Mace Tyrell, Brienne of Tarth, the Queen of Thorns, Margaery Tyrell, and the Knight of Flowers.

Though House Tyrell receives the bulk of the cards in this expansion, you’ll also find new non-loyal cards for each of the seven other factions, many featuring ways to counter the primary strategies of House Tyrell. And since Oldtown falls within the domain of House Tyrell, it’s fitting that this deluxe expansion includes a new agenda focused on the Maesters of Westeros, as voted on by players during the Battle of the Trident. With new Maester characters and a potent new agenda, the power of knowledge could soon become a force to be reckoned with. Completing the expansion, you’ll uncover new options for any deck with seven new plots (one loyal to House Tyrell and six neutral).

The Wealth of Highgarden

Though House Lannister’s position of wealth is undisputed, the gold of Casterly Rock is worthless without something to purchase. The verdant plains of the Reach, on the other hand, are the breadbasket of Westeros, and the food that flows through House Tyrell can support massive armies—or starve their enemies into submission. Whether the supporters that flock to the Tyrell banner are looking for food or glory, the courtiers and knights who swear fealty to Highgarden are an undeniable source of power.

That power finds its expression in the Lord of House Tyrell, Mace Tyrell (House of Thorns, 1). Mace Tyrell, the Warden of the South, commands massive armies of infantry and knights, and in the game, Mace Tyrell gains power as more characters gather beneath your banner. In fact, after a Tyrell character enters play under your control, you can pay one gold to have Mace Tyrell gain one power—allowing you to rush to fifteen power even faster. In most circumstances, you’ll reliably trigger Mace Tyrell in marshaling, but with ambush characters and cards like The Queen of Thorns (Core Set, 186) and Bitterbridge Encampment (Across the Seven Kingdoms, 5), your power may accelerate much faster.

You’re not limited to using other cards to give Mace Tyrell more opportunities to claim power, however. As an Action, Mace lets you kneel your faction card to remove another Tyrell character you control from the game until the beginning of the next phase! Obviously, this lets you claim more power for Mace Tyrell himself, but there are several other, subtler applications. For instance, Mace Tyrell gives you tremendous value from any Tyrell character with an “enters play” effect—potentially using a card like House Florent Knight (Wolves of the North, 37) or Alerie Tyrell (Lions of Casterly Rock, 37) over and over again throughout the game.

Temporarily removing a character from the game is also an ideal way to combat troublesome attachments such as Craven (Called to Arms, 26) or Marriage Pact (Guarding the Realm, 22). Because these attachments are terminal, they’re simply discarded when the attached character leaves play, letting you discard them for the simple price of kneeling your faction card.

And what better way to reap greater benefits than a location that rewards you when Tyrell characters enters play? The Hightower (House of Thorns, 17) costs four gold, but after a Tyrell character enters play under your control, it lets you gain one gold and draw one card. Combined with Mace Tyrell, The Hightower could singlehandedly supply you with gold and cards for the rest of the game.

The Valiant Never Taste of Death

Since the earliest days of House Tyrell, some of their greatest strengths have been intrinsically tied to their Knights and Ladies. Though chivalry in Westeros may be an ideal or a façade, it is still a useful tool for the Tyrells, and many of their most impactful characters bear these traits.

Tyrell Knights in particular are often rewarded for attacking alone, ranging from cards like The Knight of Flowers (Core Set, 185), to Mare in Heat (The King’s Peace, 44), to Lady Sansa's Rose (The Road to Winterfell, 24). Now, you’ll find another way to make those Knights more impactful with Ser Garlan Tyrell (House of Thorns, 3). Ser Garlan is perfect for inspiring all of your Knights to great feats—during a challenge in which one of your Knights is attacking alone, you can discard a card from your hand to raise the claim on your plot by one until the end of the challenge!

Obviously, raising your claim is an incredibly powerful effect—and when you maximize the impact with two-claim plots, you could deal significant damage to your opponent with just a few challenges. Still, Ser Garlan Tyrell requires you to win challenges in which a Knight is attacking alone—and who better to clear the way for your Knights than Ser Garlan’s sister, Margaery Tyrell (House of Thorns, 6).

If there’s a troublesome character that would block the path for your jousting Knights, Margaery Tyrell is the perfect character to lead that character astray. After Margaery Tyrell is declared as an attacker, you can kneel one of your opponent’s characters and force it to participate as a defender, even if it doesn’t bear the corresponding challenge icon. If you add the kneeling power of cards like Melisandre (Core Set, 47) or Even-Handed Justice (Wolves of the North, 26), Margaery Tyrell should have little trouble clearing a path for a valiant Knight to follow.

The Power of Knowledge

In the world of Westeros, as in A Game of Thrones: The Card Game, knowledge is often equated to power. Few have more knowledge of the world and its workings than the Maesters, and in the House of Thorns expansion, the Maester-centric agenda voted on by the community during the Battle of the Trident events becomes reality.

One of the first lessons any player learns in A Game of Thrones: The Card Game is that you and your opponent each draw two cards near the beginning of every round. If you’re unable to gain a reliable source of additional cards, or if it’s late in the game and your hand has been depleted, drawing the right two cards has the power to make or break your chances for victory. With The Conclave (House of Thorns, 45), you gain a new level of control over what you draw.

First, this agenda is inherently tied to the Maesters of Westeros—you can include non-loyal Maester characters from any faction in your deck, and you must include at least twelve Maesters. Already, this allows you to bring efficient characters like Maester Caleotte (Core Set, 107), Maester Aemon (Core Set, 125), and Maester Cressen (Core Set, 46) together in a single deck, but there’s a far greater benefit to The Conclave than the options it opens up for deckbuilding.

After you’ve drawn your starting hand, but before you place setup cards, you must place the top seven cards of your deck facedown underneath The Conclave. Then, in the game, these cards will form a pseudo-sideboard—after you win a challenge with a Maester character, you can choose one card under The Conclave and switch it with the top card of your deck!

It’s easy to see the massive implications of gaining the support of The Conclave. Perhaps you’ve been short on economy locations throughout the game—chances are good that there’s one under The Conclave that you can bring in at will. Maybe there’s a specific event, such as Tears of Lys (Core Set, 44) or Vengeance for Elia (Calm Over Westeros, 96), that you wouldn’t necessarily want taking up room in your hand all the time… but it’s right there under The Conclave if you need it. And, of course, if you have a way to draw when you win a challenge, such as Lannisport (Core Set, 98) or The Mander (Core Set, 193), it’s easy to place a card on top of your deck and immediately draw it! No matter which faction you play, it’s worth considering the adaptability that The Conclave can bring to your games.

The ambition of House Tyrell is yours to channel with the House of Thorns expansion for A Game of Thrones: The Card Game.