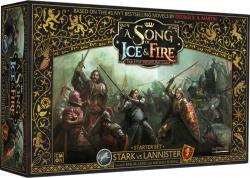 Conflict and combat are highly mental engagements. If one can cause their opponent to cower in fear of their attack, then the battle is halfway won. Creating a scary visage goes a long way to making your opponents fearful of your presence. In the Free Folk army, the Followers of Bone have allied themselves with the Lord of Bones, dutifully following him where he goes and fighting on his behalf. Their penchant for adorning themselves in all manner of bones as well as wielding them may seem crude, but it is still certainly effective. And while their attacks might not be as entirely effective as steel swords or plate armor, the effect on enemy morale more than makes up for it. Soon, Free Folk commanders will be able to add this disquieting unit to their ranks.

The Followers of Bone cost six points to field. Their mid-range cost comes with moderate stats. As a melee unit, they have a respectable melee attack total of eight when at full ranks, hitting on 3+. Their speed is a fairly average 5. Their defensive stats might leave a little to be desired. As stated above, bones are no true replacement for steel, but it is better than simply crude furs that other Free Folk units take to battle. As such, their defensive save is only a 5+ and their morale to fight is moderate, with a 7+. It might make commanders want to keep them away from combat. But that’s where they would be mistaken.

Being stuck in combat is right where the Followers of Bone want to be. Of course, as a melee unit, having them elsewhere would be a waste, but attacking them is a true tough decision for opponents. This is because of their Horrific Visage special rule. It says that any time they are attacked with melee by an opponent, before that attack is resolved, that attacking unit must perform a Panic Test. This means that, depending on the opponent and depending on the roll, the Followers of Bone could be seeing few attack dice headed their direction every time they’re attacked. And anytime that enemy models can be removed from the board is a win. Units down to their last rank might find themselves even wiped out simply because their resolve failed the at the last moment.

The Followers of Bone unit box also comes with the Champion of Bone unit attachment. He works well with just about any unit, but particularly well with the Followers of Bone. His special ability, Prey on Fear, lets the unit restore up to two Wounds when an enemy engaged with them fails a Panic Test. Since the Followers are going to be causing Tests every time they are attacked with melee, it means that the moderate defensive abilities they have could easily be mitigated by opponents losing figures from Panic Tests against them.

Together, the Followers of Bone and the Champion of Bone are a formidable unit on the battlefield. The best place to find them will be in melee, possibly even benefitting from going against multiple enemy units at a time in order to maximize their Horrific Visage ability. Commanders will do well to keep them away from enemy ranged units and aim them at targets with poor Morale stats. That strategy will do them well on the battlefield.