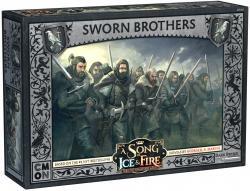 Manning The Wall, the Night’s Watch is primarily a defensive force. They keep the nightmare horrors that live further north from invading their way into the southern lands of Westeros. Their job includes knowing the dangers that they may be facing, as well as information on enemy formations, numbers, and any potential weaknesses there might be. They cannot afford to be caught unaware by an advancing enemy force. The Ranger Trackers serve as the Night’s Watch’s eyes and ears out in the field. These scout cavalry troopers undertake dangerous missions in enemy territory in order to gain vital intelligence. Soon, Night’s Watch commanders will be able to add this unit to their forces in the A Song of Ice and Fire: Tabletop Miniatures Game.

The Ranger Trackers cavalry unit costs six points to field. The unit really packs in the value for those points as well. While their speed might seem moderate at six, it’s important to remember that, being a cavalry unit, they get a free Maneuver action at the start of their turn. That means they can easily head up to 12” with a direction change in the middle, letting them skirt around enemy units or obstacles. Being light cavalry, they are not heavily armored, so their Defensive Save is only a 5+. However, their Night’s Watch training does imbue them with a Morale of 6+.

On the offensive side of the coin, they are equipped with both short-range recurve bows and short swords. However, Night’s Watch commanders will probably want to make more use out of their bows, as they have slightly better stats at seven dice and 3+ to hit, as opposed to six dice and 4+ to hit in melee. However, those stats alone only tell part of the offensive story for the Ranger Trackers. They also have an Order, Mark Target. This gives Vulnerable to an enemy at Long Range and in Line of Sight. This is perfect for setting up a devastating charge or volley of arrows. It should be noted that the Ranger Trackers are under no obligation to immediately attack the unit they Mark, and do not need to immediately expend that token. They can readily toss the Vulnerable marker out there and then attack someone else, or retreat away to a safer position, setting up the enemy for a knock-out blow from another Night’s Watch unit. This makes the Ranger Trackers extremely flexible tactically on the field.

When this cavalry hits the table, Night’s Watch players will have a speedy force that can deal some quick damage to the enemy, setting up for the slower units to come in and finish things off.