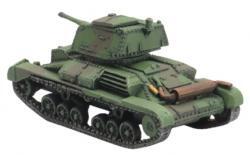 The A10 Criser Mk II was developed along side the A9 Cruiser tank. It was designed as an infantry tank, however its armour protection was deemed not sufficient for this role, so it was reclassified as a heavy crusier tank instead.With twice as much armour as the A9, the A10 proved to be a good support tank for the armoured squadrons.

The A10 went to war in France and fought though the first campaigns in North Africa in 1940-1941.