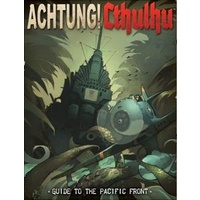 Discover the secret history of the war beyond Europe: tales of heroic struggles in the Far East and the Pacific Islands; the re-emergence of archaic evils deep within an ancient land; the terrors of jungle warfare, where humans are not the only things stalking you, and the term wildlife potentially has a whole new meaning...

The 128 page full colour softcover Guide to the Pacific Front adds a new dimension to the Secret War, including: