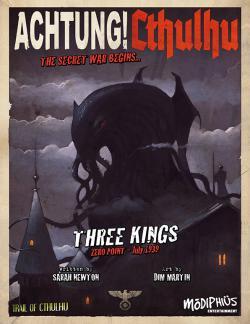 Three Kings is the first in a series of standalone adventure supplements in the globe-spanning Zero Point campaign for Achtung! Cthulhu written by Sarah Newton. Join a band of heroic soldiers, agents, and partisans behind enemy lines on the eve of World War Two, as they discover the unspeakable horrors of Castle Karlstein in occupied Czechoslovakia!

Inside you will find everything you need:

Discover the secret history of World War Two - stories of the amazing heroism which struggled to overthrow a nightmare alliance of science and the occult, of frightening inhuman conspiracies from the depths of time, and the unbelievable war machines which were the product of Nazi scientific genius - and how close we all came to a slithering end!

Play a huge range of classic wartime heroes such as Russian political officers, German U-Boat commanders, British commandoes, RAF pilots, US rangers, Washington investigators, London journalists, Hollywood starlets, and resistance fighters from all across Europe, who must all unite in the battle against the darker side of World War Two. Play a full campaign leading from the opening shots of the War in 1939, through intrigue and adventure in Occupied Europe, the siege of Berlin in 1945, and finally the cold wastes of Antarctica in 1946!

Featuring stunning art by illustrator Dim Martin and more artists to be announced, each Achtung! Cthulhu release will be packed full of evocative and inspirational scenes and is designed to be a totally standalone product letting you jump right in to tentacle fueled wartime adventures!

Imminent episodic Achtung! Cthulhu releases will set the stage for the campaigns and main setting, the Investigator's and Keeper's Guide books arriving later this year. Written for the popular Call of Cthulhu, Savage Worlds and Trail of Cthulhu roleplaying games, Achtung! Cthulhu will thrust your characters in to the midst of a dark and desperate struggle, as Cthulhu's minions take advantage of the chaos wrought by the Third Reich to topple civilization! The massive world-spanning Achtung! Cthulhu setting features occult conspiracies, terrifying Nazi war machines, and an ancient evil so powerful that it threatens to tear the world apart!

Requires the Trail of Cthulhu rulebook to play.