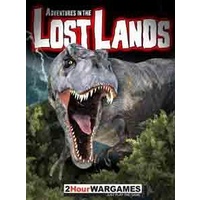 Adventures in the Lost Lands!

Take the shot!
You hear the whispers. Giant creatures from the dawn of time alive and walking the earth. Dinosaurs! How can it be? As a hunter you have to find out the truth so you follow the rumors to this God-forsaken corner of the world, Lemuria!

You've spent days and large sums of money in tracking the Beast and now it's come to this. Your bearer trembles as he pulls back the branch giving you a clear view of the Beast in all its splendor. As you steady your aim it turns, looks you in the eye and at that moment you wonder...
Who's hunting who?

Adventures in the Lost Lands, introduces you to a world like no other. A world of giant creatures and prehistoric men where you can:

In Adventures in the Lost Lands you can do all of this and more. We've included a number of linked scenarios forming a campaign which can be played solo, cooperatively with all players on the same side, or head to head against your friends. It's all up to you!

Adventures in the Lost Lands is a stand-alone game and can be used with Larger Than Life and other Two Hour Wargames rules.