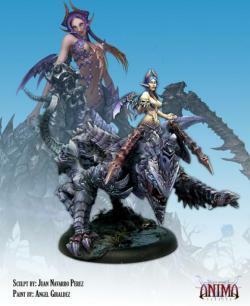 Her origins are a mystery. She is a legend among legends, a being out of dark tales that roams the earth in physical form. The most widely believed myth is that she is one of the nine great demon queens, born in ancient times from a distortion in existence that gave her consciousness. However, this may simply be another of the many stories inspired by her thousands of years of existence.

Anima: Tactics is a brutal fast paced miniature skirmish game. Face your opponent in a ferocious battle utilizing your special characters, gifted with supernatural abilities and powers. Create devastating combos by mixing the best
abilities of your characters, artifacts, and advantage cards.

Miniatures are supplied unpainted and assembly may be required.