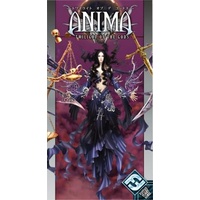 Anima Twilight of the Gods

The time of the final struggle is at hand...

Complete the trilogy with Anima: Twilight of the Gods, a standalone card game that can continues the stories from Anima: Shadow of Omega and Anima: Beyond Good and Evil! This adventure card game can be played on its own or combined with either of the other Anima card game titles, creating an even more immersive experience in a world beyond fantasy.

The game is played over a series of rounds where each player explores different locations in search of the answers they need to complete their individual missions. Once players accomplish their Basic Mission they may attempt the Final Mission, which is the path to victory!

Twilight of the Gods comes with over 100 cards, a rulebook, character counters, and dice. Assemble your party
and take a stand against the malevolent power of Genesis, the supreme being of evil!