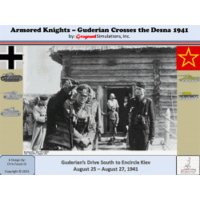 Guderian Crosses the Desna is an introductory game that pits a German Panzer Korps against some Russian Rifle division elements at the Desna River crossing of Novgorod-Seversky.  This was the Germans foray into the Ukraine that started the operations to surround and destroy the russian army in the Kiev region.  Guderian had just tried to convince Hitler that an immediate attack on Moscow would be the best course of action, but returned from the meeting and started right off to the south.  His forces would make a hurried attempt to capture the bridge over the Desna and fail at first.  But after a more planned attempt they would succeed.

The game focuses on combined arms combat with battalions as the main units and companies as the supporting arms units.  This game system accounts for varied command and control ranges for different unit types, maneuver, fire support, intelligence, mobility and survivability, air defense, and combat service support.  Use them in a coordinated manner and enhance your chance of winning each engagement.