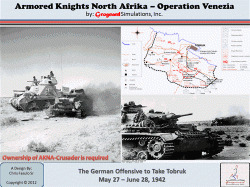 Scenarios cover large and small aspects of the campaign.  For those wanting Operation Battleaxe, this is where you'll find it.  Small, sharp and fun.  Scenarios also cover the actions around Bir Hacheim, the 50th Brigade Box, the Fall of Tobruk, the Destruction of the British Armor at Knightsbridge, the Panzer Armee in the Cauldron, and some free setup scenarios that will allow you to experiment.

Both the Germans and the Commonwealth forces are the strongest they could be for this set of engagements.  The Germans have more and better armed panzers and each Panzer Battalion is made up of 2 Panzer units, while the Commonwealth have Grants and they sure look more imposing.