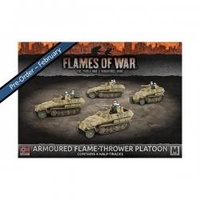 The Eastern Front shifts from the rubble-strewn streets of Stalingrad back across the Russian Steppe as the Red Army rolls back the German invasion. With new weapons fielded by the Wehrmacht arriving on the front to aid in retaking lost ground and the constant pressure of the determined Soviet resistance, the brutal battle for the East continues with Ghost Panzers and Red Banner.

Please note: Miniatures are supplied unpainted and some assembly will be required.