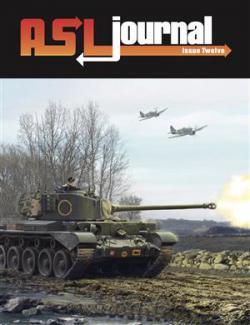 ASL Journal 10 is Multi-Man Publishing’s magazine for Advanced Squad Leader and features six brand-new articles, the latest Q&A/errata, sixteen ASL scenarios printed on cardstock, and two cardstock player aids.
ASL Journal 10’s new format features separate, cardstock scenarios, rather than the traditional method of binding the scenarios in with the rest of the pages, with the magazine itself now printed on the same 80-pound gloss paper we use for our Special Ops magazine. Players will no longer have to photocopy the scenarios or remove them from the magazine prior to playing, and the new glossy paper for the 48-page magazine proper will significantly improve the brightness and clarity of articles therein. Using scenario card inserts also makes it easier to include other inserts, such as the player aids also provided in ASL Journal 10.
Contents