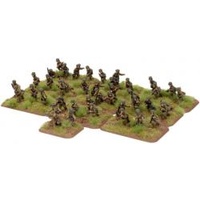 The Hungarian Utász (Sapper or Pioneer, pronounced ew-tas), like the combat engineers of many nations, had a number of roles on the battlefield. They, like the artillery, were a well-trained technical branch of the army.

Hungarian pioneers were equipped with a variety of weapons and tools including long handled shovels, saws, picks and axes, rope and other wood working tools. They carried explosives and mines as well as rifles and machine-guns. They also used either the 41M or 43M flame-thrower especially for assaulting fortifications.

Pioneer can be found in platoons as part of many types or units in the Hungarian army. They are also organised in to battalions usually deployed at Divisional and Corps level. A battalion usually contained three pioneer companies.

During the battle for Budapest in 1944 to 1945 three Assault Pioneer Battalion fought in the city. They were organised from the staff and students of the army engineer school and the pioneers from the divisions fighting in the city.

In Stalin’s Europe you can field three different types of pioneer platoon. The first of these is the Motorised Pioneer Platoon (page 72), which is the pioneer platoon found attached to each tank battalion. As their engineering tasks are associated with supporting the tanks they do not have Flame-throwers, however they are still fully equipped with all the other engineering equipment.

The second platoon found in Stalin’s Europe is the Pioneer Platoon (page 79). These pioneers come from the regiments of the infantry divisions. They are rated Confident Trained and come with Flame-throwers.

The last are the elite Assault Pioneer Platoon (page 81). These troops come from the pioneers attached to divisions and corps. They are rated Confident Veteran and are usually called on to assault fortifications. However, they are fully capable at taking on any other engineering tasks.

Hungarian Pioneer Rifle/MG teams are Tank Assault 4, and can further boost their Tank Assault ability by adding a Panzerfaust to their command team (Tank Assault 6).

Pioneer Supply vehicle are also available with all three platoons allowing you to lay mines or barber wire and gap anti-tank obstacles.