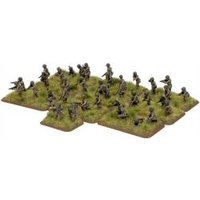 Assault Platoon US Late US749

Assault Platoon (Late) (US749) with 3 squads and Command Rifle Team

General Truscott, the 3rd Infantry Division Commander at the beginning of Anzio, was a stickler for training above and beyond the normal required level. He believed the more you trained the better your unit performed in combat. While witnessing the US Rangers training with the British Commandos he attempted to transfer some of the lessons learned to the 3rd Infantry Division.

Every new replacement coming into the 3rd Infantry Division whether they were a transfer or new recruit learned quickly that this division was different. Every man was expected to move and move fast. Keeping the pressure on the enemy and not giving an inch was the norm.

The 3rd Infantry Division use the following special rules:

Whenever an Assault or Rifle Platoon from the 3rd Infantry Division is pinned by Defensive Fire in an Assault, roll a die.

Enemy platoons do not need to make a Motivation Test to Counterattack if only assaulted by a Medal of Honor team.

Regardless of whether or not the Medal of Honor team was hit in the enemy Counterattack, you must take a Motivation Test to Counterattack.

If the platoon passes, the whole platoon may Charge into Contact and continue the assault as normal. The Medal of Honor team has finished its heroics and reverts to a normal team for the rest of the assault.

Otherwise, the Medal of Honor team Breaks Off, returning to the platoon and reverting to a normal team.

Sharpshooter
Every infantry platoon had a designated sharpshooter whose job was to take out specific enemy targets whether it be a sniper, machine-gunner, flame thrower, anti-tank gun, Panzerfaust or Panzerschreck team.

Any Assault or Rifle Platoon with a Sharpshooter may reroll any one failed To Hit and any one failed Firepower Test by a Rifle or Pioneer Rifle team in each Shooting Step.