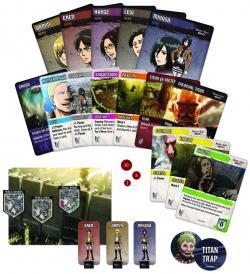 The last human city is under attack by giant, fearsome Titans - and it`s up to your team to stop them! Based on the action from the world-renown Attack on Titan anime and manga series, you and your fellow players must battle relentless Titans for humanity`s very survival in this cooperative deck-building game. Collect the weapons and tactics you need, then test your mettle on the wall before it`s too late! Play as Eren, Mikasa, Armin, and many others as you struggle to keep the Titans at bay!