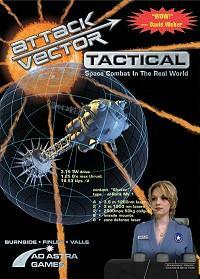 Are you tired of space combat games that are nothing more than World War II Fighter Combat with a coat of paint? Do you feel that space combat has more to offer than the tired old Submarine Strike model?

Come make the paradigm shift to Attack Vector: Tactical, where space is harsh, the decisions are critical, and there's more to victory than having the biggest guns.

Attack Vector: Tactical is a fully realized Newtonian boardgame played on a hex map with displacement factored in, and the most realistic data available for spaceborn lasers, particle beams, kinetic weapons and nuclear warhead."

This is a reprint and new edition of the Origins Award winning Attack Vector: Tactical, which brings unprecedented realism and three dimensional movement to spaceship combat, while still being playable as a boardgame.