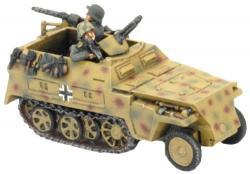 
The Sd Kfz 250 Leichte Schützenpanzerwagen resulted from requirements in the 1930s by the German Army for a half-track that could carry a Halbgruppe (a half-group of 4-5 men) on a motorised reconnaissance missions. The resulting vehicle was developed by Demag AG, based on a modified Demag D7 tractor chassis (Sd Kfz 10).

Despite the vehicle development being complete by the late 1930s, production wasn’t started until June 1941. The required numbers of Sd Kfz 250 halftracks for the Panzerdivisions wasn’t as high as that of the Sd Kfz 251 (transporting the armoured Panzergrenadiers) but it was still produced in many of the same variants.

In 1943 the design underwent a major review and modification. The main focus of the redesign was to cut the number of man-hours require to manufacture the armour plate.

The angles and shapes were simplified to use as few armoured plates as possible in place of the complex faceted shape of the earlier model, reducing nineteen main armour plates to nine. In addition permanent storage boxes were placed along outer side of the crew compartment.

The new model was simply called Neu to differentiate it from the Alte (old) models. It entered production in
October 1943.

Most of the Sd Kfz 250 vehicles were issued to the Aufklärungsschwadrons of Panzerdivisions, though many found roles as command and observation vehicles when the specialist variants of these were not available.

The Sd Kfz 250 was mainly used as the armoured transport vehicle of an Aufklärungsschwadron’s Aufklärungs platoons.

Equipment and Notes
Passenger-fired AA MG, Hull mounted. No HE.