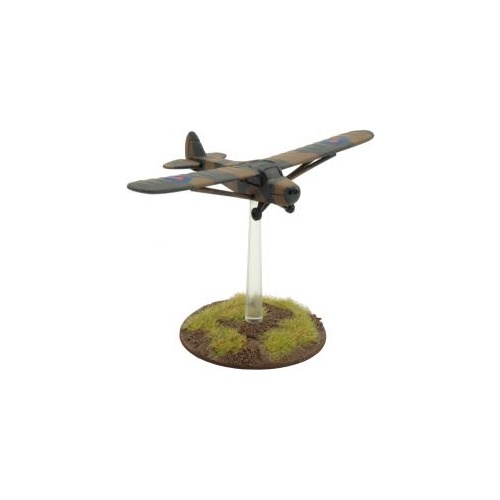 Auster AOP (BR950) with one Auster Observation aircraft and one plastic flight stand.

The use of aircraft in the role of an air observation post had its origins during the First World War. This tradition carried on during World War Two, where several American designed light aircraft were utilised in this role. These aircraft featured a tandem-cockpit accommodation which made them ideal for their roles as a reconnaissance aircraft.  While the American force lent heavily on the L4 Grasshopper, the British relied on the Taylorcraft designed Auster AOP.

Dixie Air Support
During the Cassino campaign, the German habit of fighting rear-guard actions by day and withdrawing to a new line of defence each night meant that the Allied troops were frequently unable to make contact until late afternoon because of the extensive German demolitions. On those occasions when contact could be made early in the day, the Germans were usually forced to withdraw before dark and then targets became available for the fighter-bombers.

A new system, called Dixie, was introduced to make the best use of the few hours of daylight left. When enemy targets appeared, a call was made by Corps for Dixie, which would normally be available from 7-8:30 p.m. During this period a tactical reconnaissance aircraft, in radio contact with the air controller Rover David, and the fighter-bombers in the cab rank, was to be over the forward area for the entire time.

The tactical reconnaissance aircraft’s task was to find suitable targets for the fighter-bombers and report them to Rover David. Throughout the Dixie period fighter-bomber aircraft were to be kept in the cab rank in successive formations of six. This allowed the fighter-bombers to engage targets as they tried to disengage from Allied ground units.

At the start of your turn, you may elect to either use your Auster AOP as normal (using the Air Observation Post rule) or to coordinate Dixie Air Support. The Auster AOP cannot do both in the same turn.

If you chose to use the AOP to coordinate Dixie Air Support, all air attacks against targets within Line of Sight of the Auster AOP are under its control.

Aircraft under the control of an Auster AOP may re-roll a failed first attempt to Range In.

Unlike normal air attacks that cannot be within 16”/40cm from any friendly teams (see Safety Distance rule in the rulebook), aircraft under the control of an Auster AOP will only abort if friendly teams are within 12”/30cm from the base of any aircraft.

Treat it as an Observer team on the ground (although the model sits just above the table) when determining what it can see, as the Air Observation Aircraft fly low attempting to avoid enemy fighter interception and cannot see over terrain.

The Air Observation Aircraft does benefit from its height by allowing it to re-roll the third attempt to range in if it failed on that attempt.

In the Starting Step of each turn, you reposition your Air Observation Aircraft anywhere on the table (even within 16”/40cm of friendly troops) when you would position any other aircraft. If your opponent has air support, they can roll for Fighter Interception as usual and use this to attempt to shoot your Air Observation Aircraft down instead of intercepting Ground Attack Aircraft.

Anti-aircraft Fire
The opposing player can fire anti-aircraft fire at your Air Observation Aircraft at the end of the Shooting Step, after all other shooting is complete, but just before aircraft make their attacks, just as they can at any other aircraft. This is conducted just like firing at Ground-attack Aircraft, including the limits on anti-aircraft guns’ ability to see over terrain.

A team firing anti-aircraft fire must choose between firing at the Air Observation Aircraft or at Ground-attack Aircraft. A single team cannot shoot at both in the same turn.

Since the Air Observation Aircraft isn’t actually attacking anything, Self-defence Anti-aircraft Weapons cannot shoot at it.