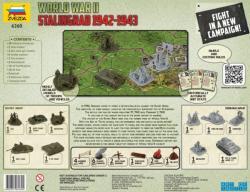 The Battle of Stalingrad (23 August 1942 - 2 February 1943) was a major battle of World War II in which Nazi Germany and its allies fought the Soviet Union for control of the city of Stalingrad in the southwestern Soviet Union.

Marked by constant close quarters combat and direct assaults on civilians by air raids, it is often regarded as the single largest and bloodiest battle in the history of warfare.

World War II: Stalingrad 1942-1943, part of the "Art of Tactic" line of games, allows players to recreate this battle. As with other games in this series, it can be played on its own or combined with any of the other titles. The game includes all of the models needed to play the scenarios in the box, but additional World War II mini kits in Zvezda's product line are fully compatible and can be used to expand the game with additional units.