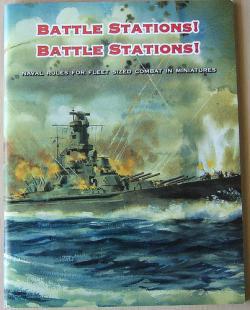 The swiftness of the combat resolution ensures a game of 30 ships will take no longer than three hours. The intense game system keeps you focused on the battle. The streamlined and intuitive game system is player friendly, allowing players to concentrate on tactics rather than minutia. While designed for 1/2400 scale miniatures, players using a larger scale can easily modify ranges. Ship statistics are included for eight nations: Britain, France, Germany, Japan, Italy, the Netherlands, the Soviet Union and the United States, and cover everything from battleships to torpedo boats. Markers track each ship’s damage, speed, torpedoes fired, aircraft and submarine depth levels to eliminate the necessity of bookkeeping. Ten scenarios featuring WWII fleet actions from the Barents Sea to Pacific Ocean are included as well as instructions for creating your own scenarios.
Scenarios include the following battles:
River Plate, 13 December 1939
Montevideo, 17 December 1939
Punta Stilo, 9 July 1940
Cape Spartivento, 27 November 1940
Sinking of the Hood, 24 May 1941
Sinking of the Bismarck, 24 May 1941
Java Sea , 27 February 1942
Cape Esperance, 11 October 1942
Guadalcanal, 13 November 1942
The Komandorski Islands, 26 March 1943
Surigao Strait, 25 October1944
Contents: 80 page rule book, player aid cards and 120 die cut markers, ziplock.