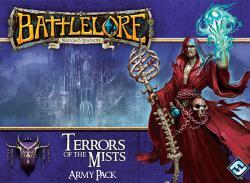 Command the Undead with the Terrors of the Mists Army Pack expansion for BattleLore Second Edition. Terrors of the Mists introduces a new faction to this game of brutal fantastical combat, with five Undead units taking up arms against the living. Diabolical Necromancers command legions of Bone Horrors and Reanimates, while charging Barghests and a horrifying Banshee terrorize your foes. This Army Pack contains everything necessary to deploy an army of Undead, including graveyard terrain tiles, new scenario cards, and a complete lore deck full of horrifying tactical surprises.

With the units of Terrors of the Mists, you can muster the two armies suggested by the included army cards, or devise armies specifically suited to the battle at hand. You can also combine these units with those of Heralds of Dreadfall for innovative and unique Undead deployments.