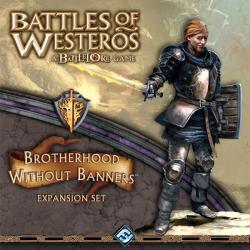 Battles of Westeros: Brotherhood w/o Ban

Brotherhood Without Banners introduces players to a new ally force with which to supplement a primary House’s forces! With new unit types, a rulebook with four new scenarios, new cards, new commanders (Lord Beric Dondarrion, Anguy the Archer, and Thoros of Myr), and even more, this expansion will bring greater variety to your Battles of Westeros experience and awesome power to your House’s cause.

Unlike other Battles of Westeros sets, Brotherhood Without Banners does not include any banner or pole components, as these outlaw warriors neither answer to a liege lord nor ride under any flag. Instead, these units do not follow normal activation rules and are controlled by an innovative a new mechanic: Brotherhood tokens.