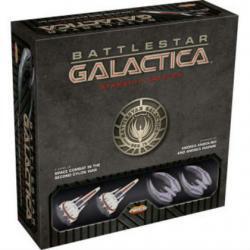 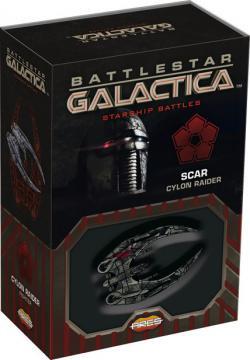 In Battlestar Galactica™ — Starship Battles, players take control of Colonial and Cylon spaceships and face each other in furious dog fights and daring missions.

The innovative game system features easy to learn rules, a unique set of maneuver cards for each spaceship, and two exclusive devices — the control panel (included in the Starter Set or as a separate accessory — BSG501A) and the rotating miniature base (included in each Spaceship Pack). Each Battlestar Galactica — Spaceship Pack is a ready-to-play model, painted and assembled.

The Raptor is designed to play multiple roles, ranging from reconnaissance and scouting, to supporting missions with electronic countermeasures and deploying additional repower. It is slower and less maneuverable than a Viper, but it is capable of short-range FTL jumps and can be armed to fight back Cylons. The Raptor can be equipped with additional internal and external armaments on the fuselage and wings, such as autocannon and missile pods, for defensive and offensive operations where combat is to be expected.