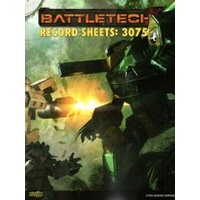 In 3067 the Second Star League disbanded. The Word of Blake, on the verge of joining in fulfillment of prophecies, acted in rage and launched the Jihad, pitting every faction against each other and even themselves. Against such an anvil, new cutting edge machines of war emerged. The discovery of an ancient Hegemony Memory Core graphically showcases the desperation of the conflict, as primitive 'Mechs not seen on a battlefield in half a millennia once again appear.

BattleTech Record Sheets: 3075 Unabridged offers players the record sheets for all 'Mechs and Combat Vehicles detailed in BattleTech Technical Readout: 3075, over 250 in total.