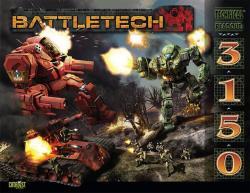 War has spread across the Inner Sphere, shattering and shifting alliances both old and new. As the Clans once more close in on humanity’s homeworld of Terra, the walls of Fortress have come down, revealing the return of Devlin Stone. Desperate for any edge, the Great Houses, Clans, and Periphery states of the Inner Sphere have unleashed a flood of new war machines, rushing them into battle on every front.

Technical Readout: 3150 collects the latest generation of battle armor, vehicles, ’Mechs, and aerospace units from around the Inner Sphere in a single print volume for the first time, complementing the Republic-heavy units shown in Technical Readout: 3145. Featuring new technologies found in Era Report: 3145 and Field Manual: 3145, with new variants and notable pilots, this volume provides players with a glimpse into the twilight years of the Dark Age Era.