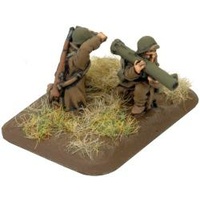 Initially designed to fill a major gap in the US infantryman’s arsenal, the Bazooka made a major leap in the evolution of man-portable anti-tank weapons. It had an effective range of 100m and could fire out to 400m. It had a penetration of about 80mm and required two crew, a gunner and loader.

The Bazooka got its nickname for its similar shape to the popular 30s and 40s radio comedian Bob Burns’ musical instrument, a home-made trombone he called a Bazooka.

Imitation is the sincerest form of flattery and the Germans weren’t slow to see the potential of captured bazookas in Tunisia. From these they very quickly copied the idea, but choose a larger calibre and created the more effective Panzerschreck.

The Bazooka Team in Flames Of War