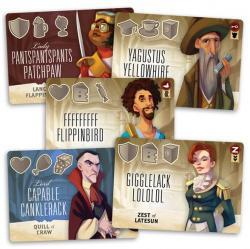 Belle of the Ball

It is the eve of Carnivale on the magical Victorian isle of Ludobel, and you are all invited to the fantastical festivities!

In the card game Belle of the Ball, players take on the roles of party hosts, seeking the best mix of guests to make their gala the greatest by the end of the night. In order to ensure that they stay one step ahead of the other hosts, players will have to carefully watch the growing line of guests at the door, inviting those in that seem to share passions with party-goers already inside, all the while handing out their precious stash of Regrets to those who should seek refuge elsewhere. Of course, other hosts may find it advantageous to invite a rejected guest inside just to collect their accumulated Regrets for later use.

Hosts may also choose to ignore the competition for guests and instead try to earn the favor of the Belle of the Ball herself, whose charms can make or break any party.